The Paris Seamstress
by
Natasha Lester 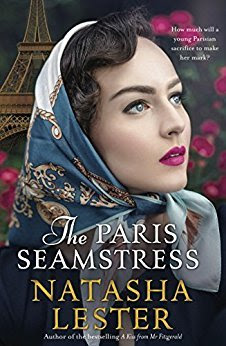 Publisher:  Hachette Australia
Publication date: 27th March 2018
Genre: Historical Fiction
Pages: 448
RRP: $29.99 (paperback) $12.99 (e-Book)
Format read: e-Book
Source: Courtesy of the publisher via Netgalley
About the book
1940. Parisian seamstress Estella Bissette is forced to flee France as the Germans advance. She is bound for Manhattan with a few francs, one suitcase, her sewing machine, and a dream: to have her own atelier.

2015. Australian curator Fabienne Bissette journeys to the annual Met Gala for an exhibition of her beloved grandmother's work - one of the world's leading designers of ready-to-wear. But as Fabienne learns more about her grandmother's past, she uncovers a story of tragedy, heartbreak and secrets - and the sacrifices made for love.

Crossing generations, society's boundaries and international turmoil, The Paris Seamstress is the beguiling, transporting story of the special relationship between a grandmother and her granddaughter as they attempt to heal the heartache of the past.
My review

I love Natasha Lester’s books so I didn’t even read the blurb. I just jumped straight in. I immediately became engrossed in Estella’s story and was quite shocked when the story jumped to 2015 and Fabienne. I think this, in turn, made me a little less interested in Fabienne’s story.

The Paris Seamstress is a look at fashion during the 1940’s and how many companies copied designs from the big Parisian fashion houses and reproduced them. Paris was the fashion capitol of the world.

The story moves from war-torn Paris to New York where a very outspoken and opinionated Estella finds it hard to break into the fashion industry. She has her own distinct ideas on fashion but are the American women ready for these ideas.

I found the overall plot of the Paris Seamstress to be quite complex and I had trouble keeping up at times. Just as I became totally engrossed in one timeline the story would switch over and I felt a resentment at being pulled away from my story. For me the gap between each switch was too large.

What I loved about the story was the strong female characters and the two burgeoning love stories.

The Paris Seamstress is filled with mystery, love, hope, optimism and loss. All centred around the fashion industry.

The problem with holding A Kiss from Mr Fitzgerald up as one of my favourite books ever is, it’s a hard act to follow.

Natasha Lester worked as a marketing executive before returning to university to study creative writing. She completed a Master of Creative Arts as well as her first novel, What Is Left Over, After, which won the T.A.G. Hungerford Award for Fiction. Her second novel, If I Should Lose You, was published in 2012, followed by A Kiss from Mr Fitzgerald in 2016, Her Mother's Secret in 2017 and the Top 10 Australian and international bestsellers The Paris Seamstress in 2018 and The French Photographer in 2019. The Age described Natasha as 'a remarkable Australian talent' and her work has been published in numerous anthologies and journals.

In her spare time Natasha loves to teach writing, is a sought after public speaker and can often be found playing dress-ups with her three children. She lives in Perth.

Posted by Veronica @ The Burgeoning Bookshelf at 17:50