Book Review: Tonk and the Battle of the 200 by Jon Mann

Tonk and the Battle of the 200 by Jon Mann

Series: The Adventures of Tonk #1

Tonk isn't your average squirrel. While most squirrels live out their lives in the safety of their home tree, little Tonk is curious. He wonders what is out there beyond the End of Things. What lingers over the horizon? What has he never seen?
One day he hears of a magical flying squirrel whose coat is as white as snow. She is held captive in a place called "The San Diego Zoo", and Tonk knows his time has come.
Leaving his family behind, he sets forth on a dangerous journey to rescue the legendary squirrel with the hope that he, too, can learn the secret of flight. Along the way he makes friends with Bogey, a crusty old jackrabbit: El Curador, a Mexican museum mouse; and Pockets, an alarmingly awkward pelican. Together they forge a trail across a treacherous urban landscape to the mysterious place where the creature has been imprisoned against her will.
Once there, Tonk and his brave friends wage war against the enemies who have imprisoned the white squirrel. In doing so, Tonk becomes much more than the simple creature he is -- he becomes a hero.
After all, who says you have to be big to make a difference?

Tonk and the battle of the 200 is a lively tale of adventure, curiosity and wonder. And a reminder to follow your dreams.

Tonk is not your average American squirrel, content to live their life in one tree never venturing farther than the weather vane on the carriage house, he dreamt of sights and sounds far away. Tonk stared out at the mystery that was the horizon and wondered what he would find at the End of Things.

One fateful day Tonk hears about a place where every animal from every continent is held captive. Inside this place is the white squirrel who can fly. Tonk thinks how wonderful it would be to fly. He could fly to the End of Things. Tonk sets out to find this prison, made by man, and ask the white squirrel to teach him to fly. Along the way he will face many dangers and make new friends. His quest for knowledge turns into a quest for freedom.

Mann has written an extraordinary adventure story with an underlying theme of death. Tonk, the squirrel, sees death around him and also has a scrape with death himself when the neighbourhood cat pounces on him.
”Some hunt, and some are hunted. Some feed, and some are fed upon. This is simply the way it is. The natural way of things.”

On his adventures Tonk meets Bogey, The Jackrabbit, who is a whole lot more worldly wise than little Tonk. Bogey saves Tonk’s life more than once as they encounter the perils of man-made machines, pets and predators.

Mann doesn’t humanise his characters. They are still very animalistic by not understanding how things in the human world work and not being able to read signs even though Bogey thinks he can which gives rise to some very funny animal names and also explains the title of the book.

The story tells the reader how the animals feel. They have a fear and hatred of humans. All humans are evil and everything they do is evil. The zoo is a terrible prison and all the animals are unhappy.
"There is no dignity to be found inside a cage, not for any living creature, including man. But for wild creatures of the earth, captivity means the loss of everything, including self.” “Once brought to that place, animals never see the outside world again. They die there!”

The writing is complex and literary and at times a little macabre.
”The dogs tore into them as if seeking nothing more than bloodshed and carnage.” “The bodies of the dancing *Tethin were flung across the concrete, their blood splattering the grass, the stench of their entrails filling the air.”

Authorial intrusion is used consistently to make the reader feel more connected and quite often gives a humorous aside to a sometimes sombre tale; for instance when the author suggests to the reader to look up a certain word in the dictionary.
A story to stretch the imagination and the vocabulary as well.

I would place this book in the same category as Watership Down – the “Not quite appropriate children’s books.” And as Watership Down was, The Battle for the 200 will be read and remembered by children and adults alike.

Content: animals die in this story
Recommended for 10years + though not for the highly sensitive child.

*Tethin – the name by which the squirrels regard themselves.

Posted by Veronica @ The Burgeoning Bookshelf at 20:07 No comments: 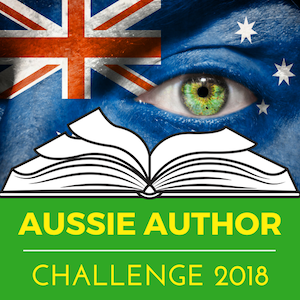 The challenge has three levels as listed below. I will be trying my best to attain WALLAROO level.

Stay tuned to hear about some great reads by Australian authors.
Posted by Veronica @ The Burgeoning Bookshelf at 21:09 2 comments:

Book Review: Jorie and the River of Fire by A.H. Richardson

When Jorie and Rufus are reunited after a year, each one having gone abroad to France and Germany to study language, they are summoned to help their beloved friends below the Tarn to rescue the Great Wizard, who has been kidnapped. With no idea where he has gone, the children dive back into the Tarn, back to the land of Cabrynthia. Taking the Magic Stones with them, they set out immediately to find the Great Grootmonya, soon learning that he has been imprisoned in a cell atop a steep mountain in the evil land of Shyloxia. Their mission is fraught with fierce fights and entanglements as Rufus learns that his beloved dragon, Chook, also has been kidnapped. How does one kidnap a dragon? It isn't easy, but their wicked adversary, the grim and gruesome Lord Fodomalk, is very resourceful. The children encounter many frightening adventures in a terrible inferno fraught with belching volcanoes and the terrifying River of Fire. And don't overlook some angry creatures and the poisonous butterflies. It is a race against time. Can the duo get to the Wizard in time, as he grows weaker with each passing hour? How do they cross the fiery River? And where is Chook? Throughout all of this, Jorie and Rufus soldier on, desperately and bravely, using their magic Stones and their warmth and affection for one another shining like a steady beacon. Join this brave pair and enjoy their adventurous journey through a magical kingdom under the Tarn.


I was very excited to receive the latest edition in the Jorie series.

Jorie and Rufus are now 13 years old and even though Aunt Lettie says she’s a young lady now and should be putting all thoughts of dragons behind her Jorie is still eager to see Rufus again and start on a new adventure.

Jorie and the River of Fire is the third book in the Jorie series and I’m saying “series” here because I’m hoping this isn’t a trilogy. I’m not ready to let go of Jorie and Rufus just yet.

The Lord of Cabrynthius, Grootmonya, is missing believed held captive by the evil Lord Fodomalk in the land of Telanzid to which only access is across the river of fire. Telanzid is a new land introduced in this book. A land on the far side of Shyloxia that is hot, dry and arid with fires burning and active volcanoes. These other worldly lands are accessed via a Tarn on the land of Jorie’s Aunt Letitia. The children enter the Tarn say the magic words and are whisked away to the new worlds.

Jorie is still cheeky, lively and talkative as ever but she is always polite. Jorie and Rufus work together for a common goal as they embark on this dangerous and unpredictable journey unaware of the perils that lay ahead, the unexpected dangers, the creatures they might meet, the good and the bad. Lord Fodomalk with calculated cunning will do everything in his power to thwart the children’s plan to rescue the Great Wizard.

The children come across Trovods (rat like people), trolls, elves, shape shifting dragons, the egg shaped people of Doonian and the deadly Daggadi (a huge metal butterfly with jaws of iron).

The imagery is vivid and the story moves smoothly between the world of the Tran and the real world. Aunt Letitia , Colonel Horsfall and housekeeper, Bessie, feature more in this book and make for some amusing moments and add old world charm as a little romance starts to develop between Letitia and the Colonel.

Jorie is the heroine of the series but it’s not all about Jorie. Rufus has his fair share of smart ideas and brave moments.

The Jorie series is one of the best 6 years+ children’s series I’ve read.
If your child only reads one book this year make sure it’s from this series!
I received a review copy via Book Publicity Services.

A. H. Richardson is a treasured storyteller, whose unlimited imagination conjures up challenging and unforgettable characters, both good and evil, daring children everywhere to delve into their imaginations and learn to rely on courage and bravery to win the day.
Born in England (yes, there are dragons there too), the author has always loved tales of flying and mythical magical creatures. She once tried to pin wings on her pony, quite sure that he could then fly!
She is the daughter of the famous composer, Clive Richardson, who always encouraged her to wite, even as a small child. She paints and sculpts, plays guitar, trained dressage competitions, is a linguist and acted on stage, film and television.

Posted by Veronica @ The Burgeoning Bookshelf at 16:23 No comments: