The Night Letters
by
Denise Leith 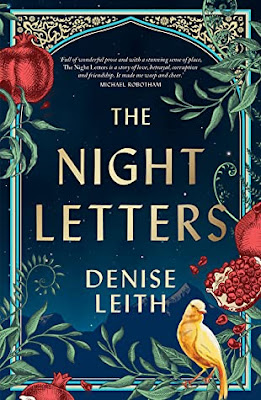 Yet when threatening night letters from the Taliban taunt the town, and young boys disappear from Jamal Mina, Kabul’s largest slum, Sofia can no longer remain silent. While the square is encased by fear, an elegant former warlord proves an unlikely ally, and a former lover re-emerges with a warning. As the search for the boys intensifies, and Sofia feels herself being drawn back into a love affair she thought had ended, it soon becomes clear that answers will bring a heavy price.

Gripping and evocative, The Night Letters takes you to the heart of Kabul in a story of secrets, friendship and love in all its imperfect guises.
My review
Australian Doctor Sofia Raso is accepted to work in a medical practice in Kabul. After 5 years working there she is much loved by the local Afghanistani people and she now calls Afghanistan home. Sofia has come to accept many of the cultural differences but when young boys start disappearing from Kabul’s slums, to use a sex slaves to the rich and powerful, she knows she can no longer keep silent.

The Night Letters is told through a few main characters all residing or working in Shaahir Square; Omar, an ageing shop owner, who has had many wives but still laments over losing the love of his life. Iman, a young girl who works in the doctors’ office, is the face of change for women in Afghanistan. Sofia Raso, the Australian doctor who has worked her way into the hearts of the people of Shaahir Square. Dr Jabril Aziz, born in Afghanistan but educated in America resulting in a blending of cultural ideas. Behnaz, the wife of Chief of Police, Wasim, is old enough to remember a time before Taliban rule and grieves for how much they have lost. Daniel Abiteboul, a UN aide worker is introduced as a love interest for Sofia but their romance is very much understated.

Through these main characters, and a few other minor characters, Denis Leith gives the reader a broad spectrum of the citizens of Afghanistan. We get to see their thoughts, feelings, hopes, dreams and also their despair as they live in fear of reprisal from the Taliban.

There are two mysteries running through the story. One being the night letters being left at the door of both Dr Jabril and Chief Wasim’s house advising them to warn their friend to stop or they will be in danger, and also the mystery of the young boys’ disappearing and who was behind this.

There is quite a lot of humour surrounding the night letters and all the gossip it creates in the square with everyone thinking they are “the friend” that needs to stop doing whatever. This humour really lightens up what could otherwise be a sad story.

I loved the descriptions of the square and the shops, the shop owners and their interactions which brought the whole scene alive whilst I was reading.

I don’t know much about Afghanistan however the author’s fondness for this country and its people shone through in her words.

Filled with strong women The Night Letters is a poignant story with characters that will touch your heart and leave you wanting more.

Denise Leith is a Sydney author, and former lecturer of International Relations, and Middle East politics at Macquarie University. Her debut novel, What Remains (Allen & Unwin, 2012) was shortlisted for the Asher Award and the Fellowship of Australian Writers National Literary Awards - Christina Stead Award. She has also published two non-fiction works, The Politics of Power (University of Hawaii Press, 2002), and Bearing Witness: the Lives of War Correspondents and Photojournalists (Random House Australia, 2004).

Denise’s work has involved extensive travel, including time in an AIDS hospital in South Africa, in a refugee camp in the Middle East and in an isolated village in the mountains of West Papua. She currently resides on the Northern Beaches of Sydney.