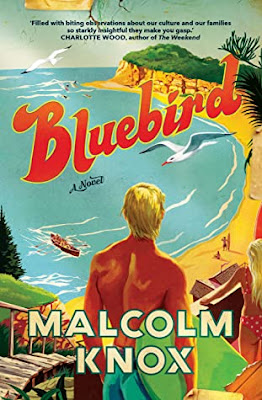 Publisher: Allen & Unwin
Publication date: 1st September 2020
Genre: Contemporary Fiction
Pages: 496
RRP: $ 32.99AUD
Format read: Uncorrected paperback
Source: Courtesy of the publisher
About the book
A house perched impossibly on a cliff overlooking the stunning, iconic Bluebird Beach. Prime real estate, yet somehow not real estate at all, The Lodge is, like those who live in it, falling apart.

Gordon Grimes has become the accidental keeper of this last relic of an endangered world. He lives in The Lodge with his wife Kelly who is trying to leave him, their son Ben who will do anything to save him, his goddaughter Lou who is hiding from her own troubles, and Leonie, the family matriarch who has trapped them here for their own good.

But Gordon has no money and is running out of time to conserve his homeland. His love for this way of life will drive him, and everyone around him, to increasingly desperate risks. In the end, what will it cost them to hang onto their past?

Acclaimed writer Malcolm Knox has written a classic Australian novel about the myths that come to define families and communities, and the lies that uphold them. It's about a certain kind of Australia that we all recognise, and a certain kind of Australian whose currency is running out. Change is coming to Bluebird, whether they like it or not. And the secrets they've been keeping and the lies they've been telling can't save them now.

Savage, funny, revelatory and brilliant, Bluebird exposes the hollowness of the stories told to glorify a dying culture and shows how those who seek to preserve these myths end up being crushed by them.

Quintessentially Australian, Bluebird is a Sydney beachside suburb filled with born and bred locals who live in a haze of nostalgia remembering Bluebird before the developers set in.

Gordon Grimes is part owner of The Lodge, as it is affectionately called by locals. He has made it his life ambition to save The Lodge from developers even though it sits precariously on the edge of a cliff and is in desperate need of renovation.  The Lodge is always filled with a cast of hangers on, old surfers that spend their mornings chasing waves, their evenings reminiscing about life and their nights sleeping in the spare room of their widowed mothers' house.

Bluebird is a place where talk is overrated and time is expected to heal all wounds. Secrets swirl ominously around its inhabitants and there are plenty of old scores to settle, dodgy dealings, secret development plans and mates looking after mates.

Delivered through multiple POV from a diverse cast of characters, all linked to The Lodge in one way or another, there is never a dull moment in this irreverent, and at times politically incorrect, satire.

Malcolm Knox was born in 1966. His award-winning novels and non-fiction titles have been published in Australia and internationally. A journalist with The Sydney Morning Herald since 1994, he has won three Walkley Awards for investigative journalism, magazine feature writing and sports journalism, as well as a Human Rights Commission Award. He lives in Sydney with his family.

Posted by Veronica @ The Burgeoning Bookshelf at 22:41