An Unusual Boy
by
Fiona Higgins
An extraordinary boy. The mother who loves him. The fight of their lives. 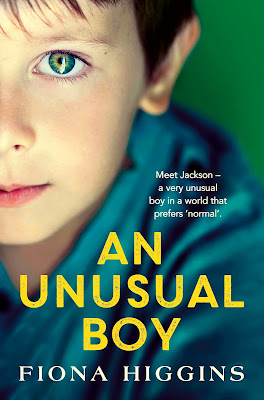 Publisher: Boldwood Books
Publication date: 20th October 2020
Genre: Contemporary Fiction
Pages: 391
RRP: $5.69AUD (Kindle)
Format read: eBook
Source: Courtesy of the publisher via Netgalley
About the book
Julia Curtis is a busy mother of three, with a husband often away for work, an ever-present mother-in-law, a career, and a house that needs doing up. Her fourteen-year-old daughter, Milla, has fallen in love for the first time, and her youngest, Ruby, is a nine-year-old fashionista who can out-negotiate anyone.

Then, one Monday morning, Jackson follows his new friend Digby into the school toilets. What happens inside changes everything; not only for Jackson, but for every member of his family. Julia faces the fight of her life to save her unusual boy from a world set up for ‘normal’.
My review

An Unusual Boy is a heart-wrenching  story about a family struggling to keep from falling apart.

Julia is trying to run her family of five single handedly since her husband is overseas with work a large amount of the time. This can be stressful on a marriage at the best of times without the added burden of a child with a neurological problem.

I have to admit I was scared to read this book but I was also scared not to read it. We have our own unusual boy and although he is only four I worry about the life that is ahead of him. I could totally empathise with the Curtis family and the long road they have already travelled to get Jackson to the age of eleven. It was easy for me to imagine the years of doctors appointments, tests of all sorts and endless speech therapy.

So many reviewers stated that they fell in love with Jackson however in reality how many people can even tolerate someone else's child running circles around the table at a cafe or hitting out because the words won't come.

"Other parents have been less forgiving, including at Jackson's old school where we were progressively shunned by parents variously irritated or disturbed by Jackson's unusual behavior."

I read this book in one day and I cried from beginning to end. The tears are welling as I write this review.

An Unusual Boy is a book everyone should read. Mothers will resonate with Julia and her busy life, her constant tired state and always wondering if she is getting it right.

Mother-in-Laws often get a bad rap in books so I was pleased to see Pamela step in and help out and for Julia to see her MIL in a new light.

I loved Miss Marion and I think it takes someone very special to see something more to a child than their hyperactivity and to take it and turn it into a skill. That's the magic that some teachers possess! Every child has something special inside them.

An Unusual Boy is a story about acceptance, inclusion, diversity and not judging.

Fiona Higgins is the Australian writer of several bestselling contemporary novels including The Mothers' Group and Wife on the Run. Her work has been widely reviewed, translated internationally, and described as 'page-turning domestic melodrama for the social media age.' She lives with her family in Sydney.

Posted by Veronica @ The Burgeoning Bookshelf at 22:34