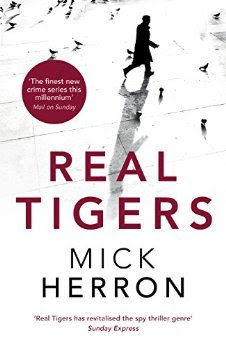 London's Slough House is where disgraced MI5 operatives are reassigned to spend the rest of their careers pushing paper. But when one of these fallen spies is kidnapped by a former soldier bent on revenge, the agents must breach the defenses of Regent's Park to steal valuable intel in exchange for their comrade's safety.

The kidnapping is only the tip of the iceberg, however, as the agents uncover a larger web of intrigue that involves not only a group of private mercenaries, but also the highest authorities in the Security Service.

After years spent as the lowest on the totem pole, the spies suddenly find themselves caught in the midst of a conspiracy that threatens not only the future of Slough House, but of MI5 itself . . .

I really enjoy Mick Herron's writing! It is witty, sharp and full of snark.

Real Tigers has the "slow horses" team back again in another amusing, tension filled episode in the Slough House series. They are a bunch of MI5 failures who spend their days scanning data looking for anomalies and dreaming of the break that will see them back at Regent's Park.

Those at the top, pulling the strings at Regent's Park, are constantly trying to back-stab each other, continually worried about their place in the hierarchy.

River once again acts before thinking, as he goes out on his own to solve a case. And Regent's Park are at the centre of a botched operation, calling in the slow horses to be the fall guys.

Sometimes I feel Herron doesn't like his characters. He puts them through trying situations and they never seem to get anything right. They constantly bicker and don't even like each other. However, all this suffering only makes them more endearing but don't get too attached as Herron doesn't baulk at killing them off.

Prepare for a wild ride with this story of corruption, double crossing, secrets and murder.

Mick Herron was born in Newcastle and has a degree in English from Balliol College, Oxford. He is the author of six books in the Slough House series as well as a mystery series set in Oxford featuring Sarah Tucker and/or P.I. Zoë Boehm. He now lives in Oxford and works in London.
Author website

Posted by Veronica @ The Burgeoning Bookshelf at 21:47