Book Review: Blood Will Have Blood by Thomas H Carry

Blood Will Have Blood
by
Thomas H. Carry 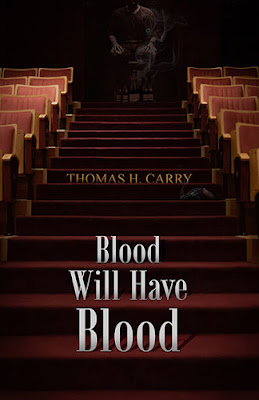 Publisher: Bad Alley Books
Publication date:  19th January 2021
Genre: Crime
Pages: 223
Format read: eBook
Source: Courtesy of Smith Publicity Services
About the book
Seven years in New York, and that big break has yet to materialize for struggling actor and inveterate pothead Scott Russo. Performing in terrible, barely attended Off-Off Broadway productions, hopping from one soul-crushing job to the next, Scott slacks away in a pot-fueled haze and contemplates throwing in the towel on his anemic career. The only thing that keeps him going is the humiliation of returning home to Baltimore. That and his current theatrical gig: an idiotically bad production of Macbeth.

Broke and out of a job, Scott jumps at his friend’s offer to work for a pot delivery service, only to get caught in a web of brutal Irish gangsters, a charismatic psychopath, ruthless prosecutors, and clueless actors. As his theatrical and criminal worlds collide in mayhem, murder, and betrayal, Scott finds himself morphing into a bumbling and blood-stained Macbeth, on stage and off.

If he can just make it to opening night…
My review
I really enjoyed this gritty crime novel. My first book by Thomas H Carry.

Scott is a down and out actor, doped up on pot, wondering where his life is going but not having the motivation to really care. Scott has a disdain for the scrabble for big money. Basically he was lazy! However when friend and pot delivery guy Freddie suggests he join the postmen, a pot delivery service, Scott’s disdain for big money soon diminishes as he sees this as an easy way to make himself some big money.
Carry’s writing style is edgy with plenty of dark humour and the setting of New York City with its seedy underworld of territorial crime bosses and the grab for power was easily imagined.
What at first looks like easy money soon sees Scott complicit to murder and by the time he realises he needs to get out of this, everything conspires against him to wedge him deeper and deeper into the deadly game.
The story had me on the edge of my seat and had me eagerly reading with no idea where the plot would go or how Scott could possibly get out of this situation.

There is plenty of violence and it’s a bit gruesome but I feel it wasn’t overdone.
I enjoyed the connection between Scott’s real life dramas and his acting part as Macbeth and how the more his life unravelled the better his acting became.
Blood Will Have Blood is a cleverly plotted, gritty noir crime which will appeal to fans of Elmore Leonard, Lawrence Block and Lou Berney.
5/5  ⭐⭐⭐⭐⭐
Meet the author 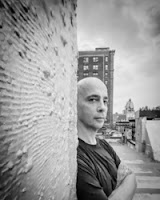 Thomas H. Carry's debut novel, Privilege (Koehler Books, 2020), was an Amazon bestseller in satire fiction and named one of the best 100 indie novels of 2020 by Kirkus Review. Carry holds a doctorate in literature and has worked as a professional actor, educator, consultant, and bouncer. He lives in Manhattan with his wife.
Author website  ||   Instagram

Posted by Veronica @ The Burgeoning Bookshelf at 17:15