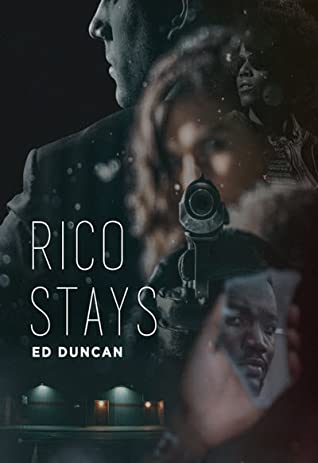 Using Rico’s girlfriend as bait, vengeful killers soon would be coming for him. The only question was whether he would face them alone or with help from Paul.
My review

Rico, hit-man for hire, is back in full force in the third and final instalment of Ed Duncan's Pigeon-Blood Red trilogy.

Rico finds himself on the wrong side of the local crime boss after a good samaritan act goes terribly wrong. There are three men dead and Rico ends up in hospital. He now has two men looking for him on a path of revenge.

"He was a killer with a conscience...... he only killed people who 'had it coming'."

Rico always gave his adversaries a chance. Whether they took it or not was up to them.

Rico turns to acquaintance (Rico doesn't have friends) Paul Elliot to help him hide out while he recovers from a gunshot wound.

Rico Stays is another fabulous read in the Pigeon-Blood Red trilogy. There is a lot of character development in this story and we get to know not only Rico's past but also Paul's. The shoot-outs are still there but the characters take centre stage. Paul Elliot features more in this story with a high school reunion and a hook-up with an old flame ending with Paul contemplating what he really wants from life and love.

This can be read as a stand alone with snippets of backstory filling the reader in on previous events. However you will want to read the first two books because Rico is freaking awesome.

The story ramps up to an explosive ending and Rico just may have found his first real friend in Paul. And I could easily see that Paul has a bit of a man crush on Rico.

Rico Stays has everything I have come to expect from Ed Duncan; drama, suspense and a touch of humour.

Ed is a graduate of Oberlin College and Northwestern University Law School. He was a partner at a national law firm in Cleveland, Ohio for many years. He is the original author of a highly regarded legal treatise entitled Ohio Insurance Coverage, for which he provided annual editions from 2008 through 2012. Rico Stays is the third novel in the Pigeon-Blood Red Trilogy which began with Pigeon-Blood Red and was followed by The Last Straw.Ed, originally from Gary, Indiana, lives outside Cleveland.

Posted by Veronica @ The Burgeoning Bookshelf at 21:58