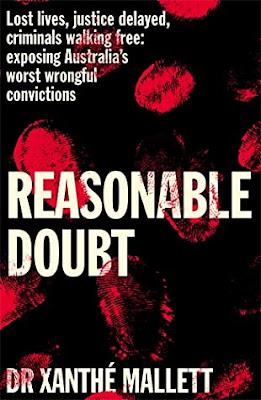 Publisher: Pan Macmillan Australia
Publication date: 28th July 2020
Genre: Non Fiction / Crime
Pages: 272
RRP: $32.99AUD
Format read: Trade paperback
Source: Courtesy of the publisher
About the book
We all put our faith in the criminal justice system. We trust the professionals: the police, the lawyers, the judges, the expert witnesses. But what happens when the process lets us down and the wrong person ends up in jail?

Exposing false confessions, polices biases, misplaced evidence and dodgy science, Reasonable Doubt is an expert's account of the murky underbelly of our justice system - and the way it affects us all.
My Review
I don't read a lot of non-fiction but crime fiction is one of my favourite reads so I was very interested in Dr Xanthe Mallett's book Reasonable Doubt.
Dr Xanthe Mallett has delivered a story that is both informative and interesting. One of the catch phrases on the cover is: exposing Australia's worst wrongful convictions. I am sure everyone can think of at least one case where the justice system got it all wrong. Lindy Chamberlain's conviction of the murder of her daughter comes to mind, but I was surprised how many times they get it wrong. Mallett covers five cases and also the case of lawyer X (Nicola Gobbo).

"When evidence focuses on guilt testing, to the exclusion of innocence testing, miscarriages of justice occur."

Reasonable  Doubt is a fascinating read. We put our faith in the justice system to protect the innocent but sometimes it goes terribly wrong - coerced confessions, lab errors, prejudice, unreliable evidence, incompetence and corruption are all discussed in the cases covered.
I would rather see the odd criminal go free than to see an innocent person in prison.
The CSI element is engrossing. Dr Mallett explains the introduction of DNA testing which helps to prove both guilt and innocence but even this can sometimes go wrong when human error is included in the mix.
Dr Mallett backs up her case studies with notes from experts in different fields of forensic science; Blood spatter, DNA profiling, forensic linguistics, false confessions, rules of disclosure, allowable evidence.
I read this book with astonishment and a whole lot of unease at how easily even the experts get it wrong sometimes. However, Dr Mallett leaves us with some final words of optimism.

"Don't be depressed, though. These cases are awful and the stories sad. But, generally, our justice system works, and those who have committed crimes are sent to prison, and the innocent are exonerated."

If you are a reader of crime fiction this book will fascinate you as fact is always stranger and much more compelling than fiction.
⭐⭐⭐⭐
About the author
Dr Xanthé Mallett is a forensic anthropologist and criminologist, author and television presenter. She has written two previous books: Mothers who Murder(2014) and Cold Case Investigations (2019).

In addition to her academic and professional work, Xanthé contributes to various true-crime television series, and is a regular contributor to crime news stories for television, radio and print media.
This review is part of the Book Lover Book Review Aussie author challenge

Posted by Veronica @ The Burgeoning Bookshelf at 09:05