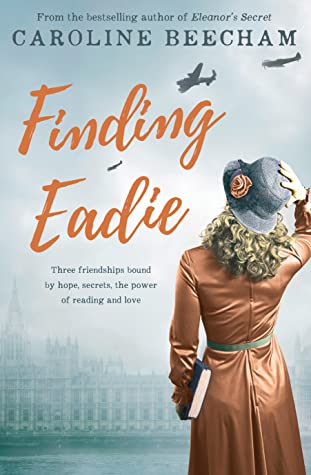 Publisher: Allen & Unwin
Publication date: 2nd July 2020
Genre: Historical Fiction
Pages: 368
RRP: $29.99AUD
Format read: Paperback
Source: Courtesy of the publisher
About the book
London 1943: War and dwindling resources are taking their toll on the staff of Partridge Press. The pressure is on to create new books to distract readers from the grim realities of the war, but Partridge's rising star, Alice Cotton, leaves abruptly and cannot be found.

Alice's secret absence is to birth her child, and although her baby's father remains unnamed, Alice's mother promises to help her raise her tiny granddaughter, Eadie. Instead, she takes a shocking action.

Theo Bloom is employed by the American office of Partridge. When he is tasked with helping the British publisher overcome their challenges, Theo has his own trials to face before he can return to New York to marry his fiancee.

Inspired by real events during the Second World War, Finding Eadie is a story about the triumph of three friendships bound by hope, love, secrets and the belief that books have the power to change lives.
My review

Finding Eadie, set during WWII, highlights the importance of books and reading especially during times of hardship.

“It’s important to carry on giving people some much-needed escape from the cruel realities of war.”

Centred around Alice Cotton and the publishing company she worked for in London, Caroline Beecham brings to the fore the plight of women at a time when outward appearance was very important and unmarried mothers were scorned and vilified. A time when women went away, and lied about nonexistent husbands, to have their babies where no one knew them.

The men in the story were supportive but I noticed their surprise when they realised that Alice was intelligent and could give useful effective input into the publishing business. I found this aspect very real and it’s good to see how far we have come from the archaic outlook of the 1940’s.

Two plot lines run through Finding Eadie. Firstly the hardship suffered by businesses, especially publishing houses with rationing of paper meant a reduction in books being published and the London fires having destroyed almost all their printing equipment. The second storyline is the ostracization of unmarried mothers, baby farms, illegal adoptions and the women working to have laws changed to protect these babies.

The story travels from London to New York where we see the American side of Partridge Publishing. Leo Bloom is sent from New York to the London office to check through their accounts with a view to selling the London office. I loved the nostalgic mentions of blocks of book shops and how important books were for people’s mental health and it was sad to learn about the demise of a lot of these shops. These things are still extremely relevant, especially this year when books are being used to entertain and distract as we are isolating.

I was immediately invested in the characters and fascinated by the working of the book industry. This is the kind of story I want! A book I’m so engrossed in that the pages turn effortlessly. A story of true friendship as Alice’s friends support her at a time when lesser friends would have shunned her.

Finding Eadie is a feel good read, all nicely wrapped up at the end leaving a permanent smile on my face.
5/5 ⭐⭐⭐⭐⭐
About the author
Caroline Beecham is a novelist, writer and producer. She is the author of three books: the bestselling novel Maggie's Kitchen, Eleanor's Secret and Finding Eadie. Her debut novel was shortlisted for Booktopia's Best Historical Fiction in 2016 and nominated for Book of the Year and Caroline herself was named Best New Authro by AusRom Today.
She has worked in documentary, film and drama and discovered that she loves to write fiction and to share lesser known histories: in particular, those of pioneering women whose lives transport us back to the past, yet speak to us now.
Author website  ||  Twitter  ||

This review is part of the Book Lover Book Review Aussie author challengeand the Australian Women Writers challenge
and the Passages to the Past Historical Fiction Challenge
Posted by Veronica @ The Burgeoning Bookshelf at 23:30