The Night Whistler
by
Greg Woodland 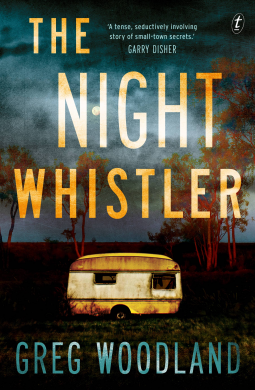 Publisher: Text Publishing
Publication date: 4th August 2020
Genre: Crime / Thriller
Pages: 400
Format read: uncorrected eBook
Source: Courtesy of the publisher via Netgalley
About the book
It’s 1966. Hal and his little brother, newly arrived in Moorabool with their parents, are exploring the creek near their new home when they find the body of a dog.

Not just dead, but recently killed.
Not just killed, but mutilated.
Constable Mick Goodenough, recently demoted from his city job as a detective, is also new in town—and one of his dogs has gone missing. He’s experienced enough to know what it means when someone tortures an animal to death: it means they’re practising. So when Hal’s mother starts getting anonymous calls—a man whistling, then hanging up—Goodenough, alone among the Moorabool cops, takes her seriously.


The question is: will that be enough to keep her safe?
Nostalgic yet clear-eyed, simmering with small-town menace, Greg Woodland’s wildly impressive debut populates the rural Australia of the 1960s with memorable characters and almost unbearable tension.
My review

Greg Woodland has delivered a gritty, dark and nostalgic, small-town crime thriller in his debut, The Night Whistler.

Set in country Australia during the summer of 1966. Twelve year old Hal and his family have recently moved to Moorabool for his father's job as Sales Rep for Prime Foods.

At a time when kids jumped on their bikes and spent their days looking for adventure, Hal and his brother come across the body of a mutilated dog.

Mick Goodenough has also recently arrived in Moorabool. Mick is on probabtion, demoted and sent to this small backwater town as punishment. After finding his pet dog mutilated and then being brushed off by his superior Mick decides to do some investigating of his own. He knows animal mutilation is a predecessor to murdering people. As Mick tries to investigate the killing he is stopped at every turn by his superior.

Hal's mother starts to receive anonymous phone calls from a man whistling a tune. As Hal's father is away with work Hal assumes the role of head of the family and to protect his mother and brother he is determined to expose The Whistler.

The Night Whistler is filled with police cover-ups, bullying, racism, shonky council dealings, lazy policing and red-herrings making this small-town crime thriller a compelling read that is at times nostalgic and at other times spine-chilling.

NOTE: I do believe there is a much anticipated sequel in the offing.

Greg Woodland is a writer, director, script developer and consultant working in Australian film and TV. He fronts an alt-country band called The Cheating Hearts and lives in Sydney with his wife and son. The Night Whistler is his debut novel.
Author website  ||
Challenges entered: Book Lover Book Review Aussie author challenge  #AussieAuthor20
Posted by Veronica @ The Burgeoning Bookshelf at 20:57