Find Them Dead
by
Peter James 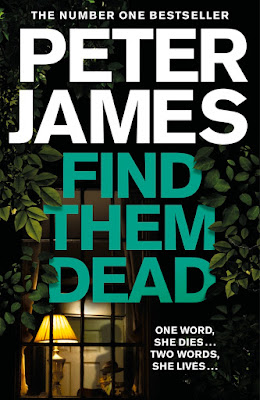 Publisher: Pan Macmillan
Publication date: 12th May 2020
Series; Roy Grace #16
Genre: Crime / Thriller
Pages: 400
RRP: $32.99
Format read: Trade paperback
Source: Courtesy of the publisher
About the book
Ending his secondment to London's Met Police, Roy Grace gets a tip-off about a county lines drugs mastermind operating out of Brighton. On his first day back in his old job in Sussex, he is called to a seemingly senseless murder.

Separately, five years after the car crash that killed her husband and son, Meg Magellan feels she has her life back together. Her daughter Laura, now eighteen, is on her gap year travelling in South America with a friend, and she is all she has in the world.

When Meg receives a summons for jury service she's excited and feels this will distract her from constantly worrying about Laura. But when she is selected for the trial of a major Brighton drugs overlord, everything changes.

Gradually, Grace's investigation draws him into the sinister sphere of influence of the drug dealer on trial, a man prepared to order the death of anyone it takes to enable him to walk free.

When Meg arrives home one night, she finds a photograph lying on her kitchen table of Laura, in Ecuador. Then the phone rings.

The caller tells her that if she ever wants to see Laura alive again, at the end of the trial, all she has to do is make sure the jury says just two words....Not guilty.

Find Them Dead is the 16th book in the Roy Grace series. I had no idea this was part of a series and I was well into the book before something came up about Roy's past that appeared to be out of the blue. I'm happy to say it works well as a stand alone. However I think if I had of been following the series from the start it would have bumped my rating up to a 5 star read.

The main plot is the trial of respected lawyer Terence Gready who is suspected of running a major drug importation company, making this novel more legal thriller than police procedural. There are a few minor plot lines that involve cases that Roy is working on.

Peter James explores the theme of jury tampering as one of the jurors receives a call that her daughter will die unless she delivers a not guilty verdict. You may have to suspend disbelief at times as there are hidden cameras and mobile phones in the court room. I have never been on a jury but I'm sure these things would be monitored.

I was on the edge of my seat as Gready's men seemed to be everywhere and know everything. Their terror was far reaching and I couldn't see how Meg could possibly influence the jury.

Short chapters make for a quick read with many chapters ending on a cliff-hanger. I enjoyed the manipulation and the lengths the accused went to, to be assured of a not guilty verdict. Reading Find Them Dead has left me eager to start back at the beginning of the series with Dead Simple.

Peter James is one of the UK's most treasured crime and thriller novelists. His Roy Grace detective novels have sold over one and a half million in the UK alone and five million worldwide in total. The series is now translated into 33 languages. He has developed a close working relationship with the Sussex Police over many years, spending an average of one day a week with them and his writing reveals a unique insight into the reality of modern day police work. He has also carried out extensive research with police in Moscow, Munich, Paris, Melbourne, Sweden, New York and Romania, as well as attending international police conferences to ensure he is at the cutting edge of investigative police work. Peter, an established film producer and script writer, has produced numerous films, including The Merchant Of Venice, starring Al Pacino, Jeremy Irons and Joseph Fiennes. A TV adaptation of the Roy Grace series is currently in development, with Peter overseeing all aspects, including the scriptwriting. In 2009 he was awarded an honorary doctorate by the University of Brighton in recognition of his services to literature and the community.

Posted by Veronica @ The Burgeoning Bookshelf at 20:35