Bound
by
M. J. Stevens
The Guardians #1
Bound was originally published in 2014 and has now been revised and given a whole new look. Edition 2 is due to be released on 30th April 2021. 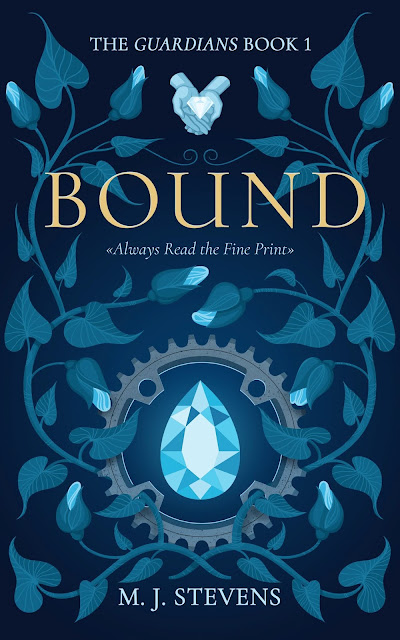 About the book
After stopping to help a mysterious stranger who was shot and left to die, Mellea Wendorn is swept into the world of the Guardians: the enchanted rulers of Selestia. To be shielded from the paranoid and tyrannic former Lord Guardian, she must agree to a future partnership with Successor Leo.

Mellea is disillusioned by their arrogance. Leo doubts if he can handle her independent spirit.

In the throes of despair, she finds hope in books defining the Guardian’s secret history, newfound friends and her own strength.

When a dangerous, timeworn enemy emerges from the shadows, the Guardians must do their duty. But if Mellea agrees to become a Guardian, will her head be on the chopping block?

"ALWAYS READ THE FINE PRINT."
My review
I loved the original version when I read it back in 2014. Below is my original review.
Mellea is a typical 17 year old. Unhappy with the way her life is going, it's boring, everyday is the same. She would like to one day meet a member of the Guardians,the ruling family of Selestia. But her parents forbid her from even reading about them in the newspaper.
On her way home from work one afternoon Mellea meets Leo the second son of the Guardians. He had just been shot at and wounded by strange people all dressed in black. Mellea stays with Leo until his people come to get him. When Leo's sentry's arrive he tells them that he chooses Mellea as his bride and she is taken back to the tower. Mellea must now learn the ways of the Guardians. Mellea's father hates the Guardians and Mellea fights against them as much as she can until she finally decides she cannot escape her fate and starts to learn the history of the Guardians. There is more to this family than meets the eye.But the MECHS have been planning for 60 years to bring the Guardian's rule to an end and Mellea must finally decide where her allegiance lies.

This is an amazing debut novel expertly written with her target audience of teenage girls 16+ in mind. You instantly form a bond with Mellea she lays her feelings and thoughts out and seems so vulnerable yet she has this tough veneer. She's feisty and speaks her mind yet she has an innocence about her, from her parents being so overprotective. All the characters were likeable and there was just enough of their personality revealed to connect with the reader but not overshadow the two main characters (Mellea and Leo). Science fiction, suspense and a touch of romance all perfectly combined.
I was about 40 pages to the end of the book and I started thinking there is not enough pages to wrap up this story. Then it hit me of course this is book one. I don't think I can wait for book two!! I really need to know whats going to happen next......
About the author 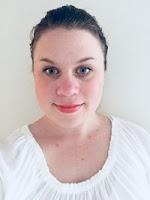 I’m M.J. I have one foot on the ground and one foot firmly planted on Selestia or another world currently under construction!

I love writing—in fact, I do it as a career as well as trying to be an author on the side. You know what they say, "Job by day, author by… whatever time I have left."

I also enjoy dogs; especially looking at them saying, “Hey look a dog!”. I'm head over heels for my wonderful boyfriend (Mr Libra) my growing collection of succulents, taking photos of my adorable lil' nephew, and chilling with music.
Author Website
Posted by Veronica @ The Burgeoning Bookshelf at 11:01