The Codebreakers
by
Alli Sinclair
They will dedicate their lives to their country, but no one will ever know... 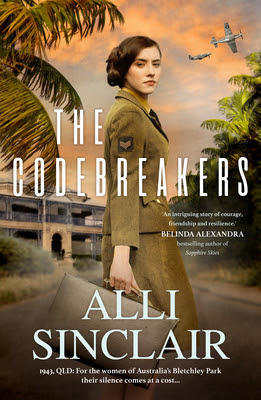 With her country's freedom at risk, Ellie works with a group of elite women who enter a world of volatile secrets; deciphering enemy communications to change the course of the war. Working under immense pressure, they form a close bond-yet there could be a traitor in their midst. Can the women uncover the culprit before it's too late?

As Ellie struggles with the magnitude of the promise she's made to her country, a wedge grows between her and those she holds dear. When the man she loves asks questions she's forbidden to answer, how will she prevent the double life she's leading from unravelling?
My review
The Codebreakers is a fictional story inspired by the real code breaking women of Australia’s Central Bureau operational during WWII and situated in the Brisbane suburb of Ascot.

I was mesmerised by this story from start to finish. Ellie O’Sullivan is a captivating character. Nothing phases her and she has an intelligent come-back to every put-down whether it comes from a male or a fellow female.

Alli Sinclair highlights how, during the war, women stepped into jobs usually occupied by men however there was still much prejudice and differing conditions and, I’m sure, wages between the two. The men working on intercepting Japanese radio communications were in a house whilst the women deciphered coded messages in the garage out the back thus the origin of the name ‘The Garage Girls.”


“All this happened under the roof of a regular-looking garage in suburban Brisbane and no one outside Central Bureau would ever be the wiser.”

I love any books featuring WWII whether it be on the troops fighting or the affect on civilians, set in any country around the world, I have read many yet I am always learning something new and finding each author has their own unique way of telling a story. The Codebreakers was another unique story where I was continually learning new aspects of how the war impacted life in Australia.

The Codebreakers features the war’s affect on all Australian citizens and how the women of the Central Bureau contributed to ending the war in the pacific. Alli Sinclair goes beyond the work that the women were involved in to include some off duty activities as they attend dances, go to the movies and fall in love. I found the story a wonderful, believable depiction of Australia during the war.

The demand for total secrecy put a huge burden on the women who felt they had to continually lie to their loved ones. It took many, many years before the women were officially honoured and recognised. With many of them passing away before this happened, which was heartbreaking.

This novel inspired me to read more about the real Garage Girls in this article.

About the author
Alli Sinclair, an adventurer at heart has won multiple awards for her writing. She's lived in Argentina, Peru and Canada, climbed some of the world's highest mountains and worked as a tour guide in South and Central America. She enjoys Immersing herself in exotic destinations, cultures and languages but Australia has always been close to Alli's heart. Alli presents writing workshops around Australia and volunteers as a role model for Books in Homes. She also works on international film and TV projects as a screenwriter and producer. Alli's books explore history, culture, love and grief, and relationships between family, friends and lovers. She captures the romance and thrill of discovering old and new worlds. and loves taking readers ona journey of discovery.
Author website
Challenges entered:  Australian Women Writers Challenge #AWW2021
Aussie Author Challenge #AussieAuthor21
Historical Fiction Challenge #HistFic2021
Other books I've read by Alli Sinclair

Posted by Veronica @ The Burgeoning Bookshelf at 21:51