The Wreck
by
Meg Keneally 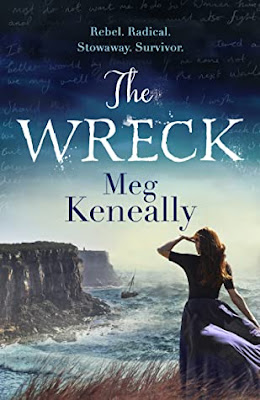 Publisher: Echo Publishing
Publication date: 1st September 2020
Genre: Historical Fiction
Pages: 384
RRP: $29.99AUD
Format read: Paperback
Source: Courtesy of the publisher via Beauty & Lace Book Club
About the Book
1820, London.
Sarah McCaffrey, fleeing arrest for her part in a failed rebellion, thinks she has escaped when she finds herself aboard the Serpent, bound from London to the colony of New South Wales. But when the mercurial captain's actions drive the ship into a cliff, Sarah is the only survivor.
Adopting a false identity, she becomes the right-hand woman of Molly Thistle, who has grown her late husband's business interests into a sprawling real estate and trade empire. As time passes, Sarah begins to believe she might have found a home - until her past follows her across the seas...
My Review

I did wonder how I would like this story as I do love Historical Fiction however I’m not a big fan of political based Hist Fic. I’m happy to say this story isn’t heavy on the political side. Sarah is very likeable. She has had a hard life and I wanted her to succeed. She is feisty, strong and intelligent. She speaks her mind.

The wreck is a story of people pushed to their limit by poverty and hunger. Set during a time when even a peaceful protest has deadly repercussions when the Crown’s yeomen intervene.

"I will go with the men when they rise, though most do not want me to do so. Women hunger, and women die, so women must also fight."

Sarah McCaffrey is a strong female lead. She is not afraid to risk her life to fight for what she believes in.

The story quickly moves from London to Sydney, New South Wales and we see that conditions are much the same as back in England. The rich are protected and prosper whilst the poor suffer and go hungry. We follow Sarah as she tries to fight for equality but not really knowing who to turn to or where to start. All avenues seem to lead to violence and bloodshed being the only answer.

Set in the early 1800’s, Keneally paints a vivid picture of a growing Sydney with boarding houses, taverns, the busy harbour and the shanties and muddy streets of The Rocks.

Through a mix of characters Meg Keneally shows the constant danger and degradation some women endured, selling their bodies on the street, to earn money to live a meagre life. In The Wreck strong women come in many forms and even when they are fighting the same fight as the men they are sneered at and looked down upon.

Sarah is helped and taken under the wing of some kind people. Firstly the captain of the ship she escaped London on and then arriving in Sydney alone and penniless she is helped by business woman and philanthropist Mrs Thistle.

Mrs Thistle is a remarkably drawn character and a key player in changing the lives of women through benevolence rather than violence.

These strong women paved the way for more strong women to keep fighting to be heard, It, as we know, is a long fight through generations and I enjoyed reading Meg Keneally’s take on where it all started.

Meg Keneally worked as a public affairs officer, sub-editor, freelance feature writer, reporter and talkback radio producer, before co-founding a financial service public relations company, which she then sold after having her first child. For more than ten years, Meg has worked in corporate affairs for listed financial services companies, and doubles as a part-time SCUBA diving instructor.

She is co-author with Tom Keneally of The Soldiers' Curse and The Unmourned, the first two books in The Monsarrat series. Her first solo novel was Fled, and The Wreck is her second. She lives in Sydney with her husband and two children.