Snotlings
by
Tarryn Mallick
Illustrated by Nahum Ziersch
Can you survive the snotpocalpyse? 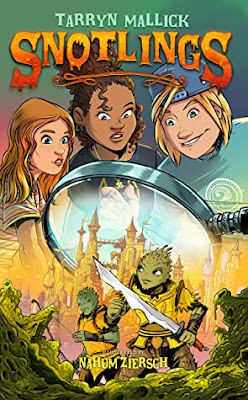 Publisher: Self published
Publication date: 25th October 2021
Genre: Middle Grade / Fiction
Pages: 298
RRP: $21.50AUD (Amazon)
Format read: Paperback
Source: Courtesy of the author
About the book
Jackson Hart loves picking his nose. But when he finds a tiny warrior in his booger, everything turns WEIRD and DANGEROUS! Not only does he have a civilisation of snotlings up his nose . . . one wants revenge.

Mucuszar and his awful germ army have conquered both nostrils and Jackson’s world is next!

Can Jackson and his friends stop the snotpocalypse? Or will Mucuszar’s deadly creation destroy the planet?
My review
Snotlings is an adventure filled story about a tiny civilisation that lived in Jackson's nostril. They ate dust and battled germs. When one of the snotlings, Mucuszar, goes rogue and enlists the germs to take over Jackson's Immune system he spends a  lot of time home sick.
Mucuszar is not happy only making Jackson sick, he wants to take over the world starting with Sydney.
Snotlings is the highly imaginative and extremely descriptive debut novel by Tarryn Mallick. This science fiction tale brings the snotlings and their world into the world of Jackson and his friends.
Snot and boogers feature highly in Snotlings with names like Crust, Goober, Igunk, Vomitor, Razorthroat and Fluefector eliciting many giggles from my young reading  buddy. It may not be for those with a sensitive stomach. I was personally grossed out but Dot thought it was hilarious.
Tarryn Mallick has included themes of bullying and empathy and mentions of the healing power of Chinese herbal medicines.
Written in alternating chapters between Jackson and the snotlings. There is plenty of action and danger in both narratives to keep the reader entertained.
A fun addition to the story is finding the tiny illustrated snotling hidden in each chapter.
Will Jackson and his friends save themselves and the planet before they are all covered in snot?
My review copy came with germ collector cards with pictures and stats of the germs, a giant magnifying glass and a jar of slime. You can order this magnificent gift box from Tarryn's website. 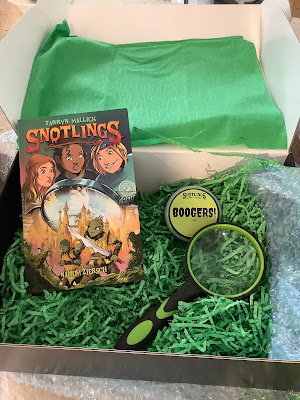 About the author
Tarryn became a writer because she had a story to tell. A story about snot! It may seem strange to write a book about boogers, but growing up, her little brother tormented her with his snot every… single… day!

She obtained a degree in Creative and Professional Writing and studied numerous courses and books, applying everything she had learnt to her first book. It took a short six years and now Snotlings is ready to be shared with everyone. 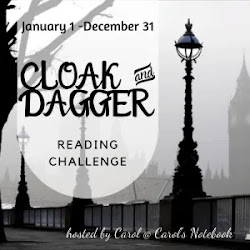