Book Review and Blog Tour: The Sound of Violet by Allen Wolf 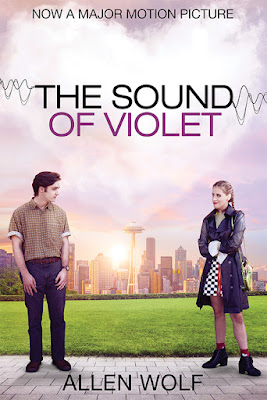 Publisher: Morning Star Publishing
Publication date: 21st September 2021
Genre: Romantic Comedy
Pages: 226
RRP: $10.80AU (Kindle edition)
$ 7.96US (Kindle edition)
format read: eBook
Source: Courtesy of the publisher
About the book
Desperate to find his soulmate, Shawn goes on one awkward date after another until he encounters the alluring Violet. He starts dating her, but his autism keeps him from realizing that she’s actually a prostitute.

Shawn thinks he’s found a possible wife while Violet thinks she’s discovered her ticket to a brand new life. This hilarious and dramatic award-winning story takes all kinds of twists and turns and has been adapted into a major motion picture.
My review
The Sound of Violet reminded me a lot of Muriel's Wedding, an Australian movie about a girl obsessed with the idea of getting married.
Shawn has wedding photos in his room, on his phone and around his desk at work. He is desperate to find 'the one'. His openness and lack of tact due to his neurodiversity   has all his dates running for the hils after an hour. Until he meets Violet, a sex worker. She knows Shawn doesn't understand what she does for a living but she is drawn to him as he is the only person who has ever been kind to her.
The Sound of Violet is a heart-breaking story of family breakdown but at the same time it also highlights the love of family through Shawn's garndmaother who would do anything to protect him and his brother Colin who teaches Shawn how to act in front of people.
When Shawn was around people he had to continually think about his words and his mannerisms. I can only imagine how hard it must have been for him in social situations.
Both Shawn and Violet had the common connection of people judging them before they got to know them.
Wolf highlights the real problem of human trafficking and how young girls are trpped into the sex-trade with no means of escape.
The writing is simplistic and the authors history with sceenplays is evident as the scenes and actions are highly visual. I could picture this on the screen as I was reading. It had a cinematic feel to it.
I was expecting The Sound of Violet to be a story about an autistic man looking for love but it was much more than that. It was a story about kindness, acceptance and healing. I can't wait to see it on the screen!
My rating  3.5 / 5    ⭐⭐⭐½
About the author

llen Wolf is an award-winning novelist, filmmaker, and game creator. He is also the host of the popular Navigating Hollywood podcast.

His debut novel “The Sound of Violet” has won multiple accolades and is described as “Entertaining, well-paced, and highly visual” by Kirkus Reviews. It is now a major motion picture. (www.TheSoundOfViolet.com)

As a filmmaker, Allen wrote, directed, and produced “In My Sleep,” which was released worldwide, won multiple film festivals, and is available on iTunes and Amazon Prime. Hollywood Reporter raved, “In My Sleep never rests, a credit to the tight, psychologically astute pacing of filmmaker Wolf.”

Allen graduated from New York University’s film school. He married his Persian princess, and they are raising two kids together. He enjoys traveling around the world and hearing other people’s life stories. Allen also cherishes spending time with his family, eating chocolate, and visiting Disneyland.
Author website || Twitter ||  Facebook  ||  Instagram
Want a sneak peak of the movie?
Anyone who purchases the novel will get a sneak preview of the trailer for the upcoming movie. They only need to email a screenshot of their order or their order number to info@thesoundofviolet.com.
Amazon links to purchase:  AmazonAU     AmazonUS
Posted by Veronica @ The Burgeoning Bookshelf at 11:55