Book Review: What Would LaVonda Robinette Do? by Kirsten Maron

What Would LaVonda Robinette Do?
by
Kirsten Maron
Can she really get away with murder? 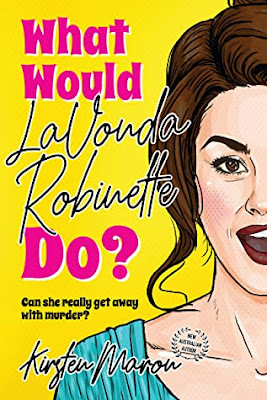 About the book
LaVonda Robinette likes to take charge, and yes, she can be a little bossy, because sometimes that is the only way to get things done. But lately, LaVonda's life is spinning out of her control: Her husband of twenty-five years walks out, she has a horrible run-in with a colleague, and to make matters worse, she experiences her first hot flush in a crowded supermarket. On her birthday.

It is enough to drive a person to murder.

After her colleague is accidentally, but conveniently killed, LaVonda is left in a bit of a state. The appropriate thing to do would be to confess and accept her punishment. And she will. But maybe she could put right a few wrongs first? Not everything is as straight-forward as LaVonda would like though and bumping people off is proving to be rather tricky.

Does she have what it takes?

Will her newfound interest put herself, and her family, in danger?
My review
Who would have thought menopause and murder would combine to make such a darkly funny and enjoyable read!
LaVonda has a lot to contend with at the moment; her husband has left her for a younger woman, she is being bullied and shut down by the new person at work, she is obligated to visit her elderly abusive mother and on top of all that she is stricken with hot flushes that descend without warning. It's little wonder LaVonda's thoughts turn to murder. Her life would be so much easier without these people.
Kirsten Maron's writing is entertaining as she builds intrigue through a witty narrative. LaVonda is extremely likeable even though she has a deviated moral sense, we see most of her dark thoughts through her internal monologue.
Many of the books themes will resonate with middle-aged women; hot flushes, mood swings, forgetfulness, paranoia, perceived invisibility and murderous thoughts.

"I've become invisible, Ann. People keep bumping into me as though they can't see me."

"It's our age. We're not relevant to society anymore so we're overlooked ......... we're sliding into middle-aged obscurity."

"It makes me furious ....... Any minor irritation flares straight into rage these days."

LaVonda's sisters Maxine and Ann are wonderful support characters and lend for some additional threads to the story.
What Would LaVonda Robinette Do? is an engaging and witty read filled with, fierce and fabulous females, a storyline that will have you laughing out loud and a twist that I didn't see coming.
4 / 5   ⭐⭐⭐⭐
About the author 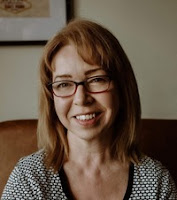 Kirsten Maron writes fictional stories and What Would LaVonda Robinette Do? Is her second completed book.
Kirsten has been creating stories since she first learned to write and at 6 won her first literary and only award with a cunning retelling of Maurice Sendak's Where the Wild Things Are.

The frustrations of middle age provided Kirsten with the authorial fuel for writing her second book, but of course, unlike LaVonda, she would never actually murder anyone.

Kirsten lives in rural NSW with her husband and several bossy kangaroos. She is currently working on her third novel; a sequel called What LaVonda Robinette Did Next.

Posted by Veronica @ The Burgeoning Bookshelf at 14:45