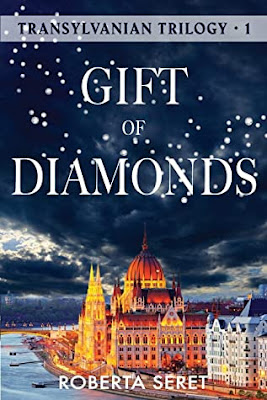 Publisher:  Wayzgoose Press
Publication date: 23rd February 2021
Series: Transylvanian Trilogy #1
Genre: Historical Fiction
Pages: 324
Format read: paperback
Source: Courtesy of the publisher via Smith Publicity
About the book
Seventeen-year-old Mica is an aspiring actress living with her parents in Romania as Nicolae Ceausescu begins his reign of terror. Her parents are covertly political and influential, which makes them a perfect target for the Secret Police. When they're arrested, Mica flees the country with her father’s rare—and possibly cursed—diamonds. With her parents imprisoned, it’s up to Mica to investigate Ceausescu, his business partners, and their plot for nuclear terrorism.

Will revealing the truth to the world finally bring her the peace she seeks?
My review
Gift of Diamonds is set in Romania under the dictatorship of Ceausescu. Roberta Seret has fused fact and fiction to pen a story that is both devastating and hopeful.
The Transylvanian Trilogy has four main characters. Four teenaged girls, inseparable, dubbed the four musketeers. Book1, Gift of Diamonds, gives us Mica's story. Seventeen-year-old Mica is intelligent, a gifted actress. She has grown up listening to her father's stories of freedom and a better life. Her father and friends were plotting an anti-communist rebellion. These were dangerous times.
One night her parents disappear and Mica must put all she has learnt into action.
Gift of Diamonds is a wonderful read, both informative and entertaining. The main character, Mica, is well developed and likeable. I enjoyed her story and wanted her to succeed. She was strong willed and intelligent but also had a vulnerability about her.
I know nothing about Romanian history and I found the political infused chapters were not overly described or complicated which made my reading more enjoyable. (I'm sadly not a history buff)
Mica's motivation to move forward was the drive to free her parents from Romania and she never gave up. There were many pitfalls and the path to freedom wasn't easy.
The bad times were moved over quickly and the concentration on happier events made the story easier to read. These were desperate times and the story could have been a lot more depressing. However, Roberta Seret used hope rather than despair to move the story along.
The information on the diamonds was fascinating, mixing history and tragedy through the story of the diamonds travels causing them to be labelled as cursed.
Gift of Diamonds is a highly engaging Historical Fiction infused with political intrigue.
4 / 5   ⭐⭐⭐⭐
About the author
Roberta Seret, Ph.D. is the founder and executive director of the Non-Governmental Organization (NGO) at United Nations, International Cinema Education Organization and the Director of ESL and Film for the Hospitality Committee of the United Nations. She is an adjunct instructor at New York University in English and has published various articles in film review for the Journal of International Criminal Justice and Oxford University Press. Her work in the United Nations Global Classroom has been praised by various influential Americans, including Michelle Obama, Mike Bloomberg, and Caroline Kennedy. The Transylvanian Trilogy is her first fiction series. She resides in New York City with her husband, and has two sons.
Author website
Challenges entered: Historical Fiction Challenge #HistFicReadingChallenge
Posted by Veronica @ The Burgeoning Bookshelf at 21:26