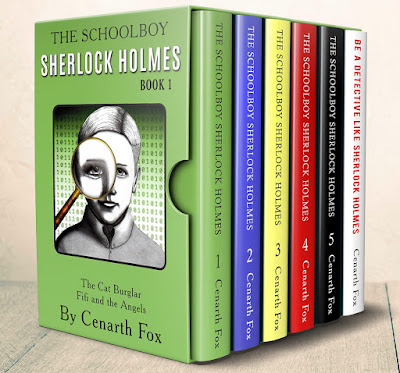 The Schoolboy Sherlock Holmes is a 5 book series staring Nicholas Twit aimed at middle-grade readers aged 8 - 12.
About the books

Book1: The Cat Burglar / Fifi and the Angels
In Book 1 Young Nick uses the detection methods of Sherlock Holmes to expose a scam and catch a very clever cat burglar. Later in Book 1 the young sleuths solve mysteries with a little help from a friendly policewoman, Detective Sergeant Les Trade. A simple observation turns into a tale involving illegal immigrants, blackmail and lazy dog-owners. But who will be the boss detective? And is Doctor Watson smarter than Sherlock Holmes?

Book 2: The Garden Gnome Mystery / The Goldfields Ghost Adventure
Nick’s new partner is Felicity Heywood-Jones who is 13. So there are two detectives—Holmes and Watson. But will they co-operate? And is Watson smarter than Holmes? In Book 2 Nicholas investigates a mystery about garden gnomes. It reminds him of a famous mystery solved by Sherlock Holmes. Felicity meets a girl who works from home and is being ripped off by a cruel person. Can Felicity help the girl and expose a nasty businessman? Strangely Nick’s gnomes and Felicity’s rip-off are linked. But how? Then Nicholas goes for a weekend trip to the country where he meets a ghost and an escaped convict. It all happens in an old gold-mining town

Book 3: The Mystery of the Awful Painting / The Mystery of the Terrible Twins / The Ned Kelly Adventure
Nick investigates a strange case and notices something unusual in the house next door. A man is stealing garbage. Nick follows and gets kidnapped twice! Felicity has to work at a creepy old house and accidentally pushes one of the owners off an upstairs balcony. More trouble. But things get really explosive when Nick tackles a mystery starring Ned Kelly. He was a famous outlaw and getting caught in the crossfire means Nick is seriously in danger. There's a map of where all the mysteries are located, word puzzles, Twit-Speak words including the fabulous sotov and edhen, a mini mystery and tips on how can write your own mysteries.

Book 4: The Clayton's Murder / The MCG Bomb Mystery / The Stinging Mystery of Jeremiah's Ghost
In this book, Felicity has some serious personal problems. Her father's girlfriend is missing presumed dead and Flick's dad is in the frame. Can Felicity help her father? And in the meantime Nick gets a really silly case of stolen roses. Ah but it involves two ladies of the theatre and boy can they act. One of the women has some rotten food and cobwebs on her dining-room table as she's mad about Charles Dickens-or is she just mad? But things hit overdrive when Nick 'n Flick get involved with a would-be terrorist at a major sporting event. Nick discovers schizophrenia and learns heaps. But suddenly it looks to be all over for the Schoolboy Sherlock Holmes. He gets tricked into saying he saw a ghost when it was a set-up, a sting to catch him out. How can the boy detective survive?

Book 5: Mr Hawthorn's Hedge / The Tallest Women in the World / The Bee & Bee Cottage / Cranley Glasspot's Newspaper
When we first meet them in this book, Nick and the others are facing a possible disaster. Nick has been tricked. A sneaky journalist has set up a trap and Nick has walked right into it. Nick is about to be exposed as a sham. How can he survive? And Felicity is investigating some strange sights and sounds happening at midnight behind a nearby hedge. Then for something special, we take a step back in time to Victorian England with a story featuring the real Sherlock Holmes and Dr Watson. It's the adventure of The Tallest Woman in the World. And finally there are two mysteries with one each for Nicholas and Felicity.
About the Author 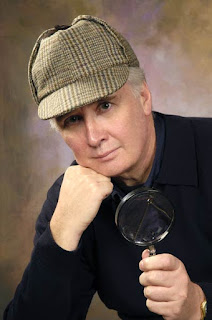 Cenarth Fox has written plays and musicals, novels and non-fiction books.
As a long-time fan of Sherlock Holmes, Fox has written three stage shows and a novel about the famous detective and given over 200 performances of his one-man show, G’day Sherlock.

The five books for young readers make up the rest of his Sherlockian canon.
His other novels include an 8 book crime series The Detective Joanna Best Mysteries and a series about a young English actress during WW2.

Fox has turned his plays about the Brontes, Agatha Christie and Shakespeare into novels and his play about Dickens is now a film.
His books are at www.cenfoxbooks.com and his stage shows at www.foxplays.com
The inspiration behind the Nicholas Twit series.
Having written so much about Sir Arthur Conan Doyle and his most famous creation, writing crime fiction for children seemed the next step. Nicholas Twit (aged 10) is the schoolboy Sherlock Holmes and has turned his bedroom of today into the sitting-room of Mr Holmes in London in 1890. The mysteries he tackles with Dr Watson (Felicity aged 14) – Nick ‘n Flick - use the methods the great detective used. The printed books are in a glossy magazine format copying The Strand Magazine which published 59 of the 60 Conan Doyle tales. They are a great way to introduce young readers to mystery fiction.
Share this post on Facebook The Schoolboy Sherlock Holmes Giveaway
Retweet this post on Twitter The Schoolboy Sherlock Holmes
Giveaway:
Cenarth Fox has generously offered 2 x hardcopy box sets to Australian addresses.
Posted by Veronica @ The Burgeoning Bookshelf at 22:26