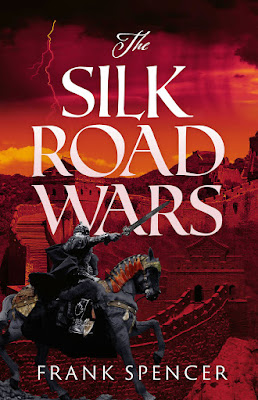 About the book and the inspiration behind it:

While the book’s main character, Chi, is based on this invented giant, the wars fought by China to defend its borders are factual. One of the first attacks covered in the book is Japan’s invasion in 1834.

Following this, many other regimes and leaders attempted to defeat the Chinese without success including King Porus of India, the Gauls, Romania, the Cossacks, the Thugees, the Moors, the Carthaginians and many others.

“The Silk Roads created a vast trading empire that made China the wealthiest of nations,” said Frank Spencer of his second novel. “This also made China the prize other nations strived to plunder.”

Throughout the Ming Dynasty the Great Wall was extended and strengthened and a formidable army was created to fight off the many and regular invaders.

Chi’s father, Peng, was a master in designing and manufacturing devastating weapons of war and set in place China’s arms race, transforming the Ming army.

Conscription was invented to replace the thousands of soldiers who lost their lives fighting off invaders, and a special elite unit was also created. Chi became China’s greatest warrior, a general who was a master in the art of war.

In defending its Silk Road, China fought back with great vigour and although always outnumbered, its superior strategies and weaponry more than levelled the odds.

China invented gunpowder and had cannon whereas most of her adversaries did not. Its greater cunning and ingenuity was also used when it bought weapons used in the American Civil War.

“The Silk Road Wars documents the many great land and sea battles and identifies Britain emerging as the prime antagonist,” said Frank Spencer.

“In building a mighty navy and an empire, Britain continued to see China as a bitter enemy and remained in conflict with the nation well into the age of steam and dreadnought battleships.”


Frank Spencer’s love of Marco Polo’s travels was further reason for creating this historical novel, which interweaves many other characters into the narrative including Chi’s friendships and his love life, and relationships with Emperor Zu Youjian and General Qi Juguang who was a master tactician and authority on Sun Tzu’s the Art of War.


Frank Spencer is a retired organisational psychologist with a Master’s Degree in Organisational Psychology. He has implemented change strategies in many of Australia’s leading organisations. Frank has worked with world leaders in organisation development and pioneered a remuneration system based on role rather than job, which can also function as a change strategy. His system is licensed to the Institute of Managers and Leaders and Frank manages remuneration structure projects on their behalf.


A Secret Life is the title of Frank Spencer's first book, an espionage thriller that follows the intriguing life of Richard Sinclair and his extraordinary life skills, including martial arts, who uses the power of friendship and love to take on the biggest battles of all.
Both books can be purchased from Booktopia:


Giveaway:
I have one paperback copy of The Silk Road Wars to giveaway courtesy of WMC Public Relations (open to Australian addresses only).


Posted by Veronica @ The Burgeoning Bookshelf at 20:23