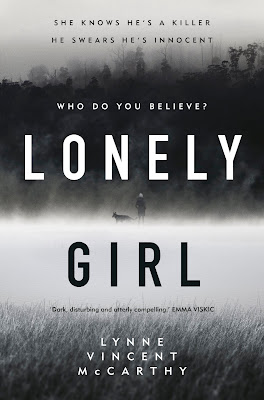 In the shadow of a mountain in small-town Tasmania, a woman named Ana is watching the clock, marking the days until she ends her life.

The strange, reclusive daughter of the local pariah, that's how people will remember her, when they remember her at all. No one will mourn her, she reasons, not really. Not even her faithful dog River. The only thing she's waiting for is the opportunity.

But then, on the very day she planned to end it all, the police find the body of local woman Rebecca Marsden. And for Ana, that changes everything. Because Ana was the last person to see Rebecca alive. Because Ana thinks she knows who killed her. And because Ana has decided to keep him for herself...


A haunting debut for fans of Patricia Highsmith, Paula Hawkins and A.J. Finn.

Ana lives alone in a secluded forested area in small-town Tasmania. Her only companion her beloved and ageing dog, River.

Right from the start we see that Ana is a little unhinged, a recluse, preferring to observe people rather than interact. After a life of mental abuse and neglect from her mother and grandmother she has learnt to be invisible, to be unremarkable and unnoticed. But she notices others.

The story starts with Ana’s all consuming thoughts for River. He is unwell and doesn’t have long to live and she cannot bear to think of a life without him so she plans for her last days with him.
The focus of the story suddenly changes to captor and captive. I don’t want to give too much away but Ana now has captive the man she believes murdered a woman the night before. She starts digging around asking questions about the murder victim and visiting the bar she was last seen in. The more she talks to the captive man she starts to question what she has done. Is he really guilty? What is real and what is imagined?

This is an eerie tale with ghosts of the past in Ana’s head as she flits from caring nurturer to sexually charged predator. She is in way over her head and can’t see a way out but the yearning is stronger than the fear.

I’m going to end with an old cliché here as this did keep me up late, late into the night because I had no idea how this was going to end.

McCarthy has earned her spot as an immensely talented crime/mystery writer with this chilling debut filled with tension and drama that will stay with you long after you’ve finished the last page.

I will be eagerly looking out for McCarthy’s next novel.

*I received a copy from the publisher

LYNNE VINCENT MCCARTHY is a script advisor and screenwriter and has worked as a Development Executive at both Screen Australia and Screen NSW. Lonely Girl is her first novel. It has also been developed for film. She lives in Sydney.

Connect with the author at the following sites.
Facebook | Goodreads


Posted by Veronica @ The Burgeoning Bookshelf at 22:44