No one had expected Ernest to die, least of all Ernest…

Ernest Bentley was a pillar of the community. But when he suddenly dies of a heart attack his wife Annie refuses to have the words ‘beloved husband’ added to his gravestone. Their son, Billy, is exasperated with his mother and worries about how she will cope on her own. Unwilling to take time out of his own busy schedule to take care of her, he enlists the services of the local vicar, Andrew, to keep an eye on her.

Before she knows what is happening, Annie finds herself telling the vicar things she has kept hidden for years. Dark secrets that had plagued her sixty-year marriage to Ernest.

When Annie’s estranged granddaughter, Ophelia, turns up for a visit, the two bond over their mutual contempt for Billy and his controlling behaviour. But when Ophelia meets Andrew, the unhappily married vicar, things start to get very complicated…

What is the truth about Ernest? Why is Annie behaving so strangely now that he is dead? And how can Andrew reconcile his growing feelings for Ophelia with his respect for his marriage and his religion?

Spanning from the Second World War to the present day, Dead Ernest is a poignant, moving and, at times, very funny look at what really goes on behind closed doors in the ordinary lives of ordinary people.


Ernest has died, suddenly and unexpected. However, Annie isn’t exactly stricken with grief. She knows how a recently widowed woman should act so she goes through the motions for her son. Sometimes she forgets Ernest is dead. They had been married for sixty years so it would be only natural to occasionally wonder why he is late for dinner.

Annie’s son, Billy, asks the local vicar to drop in and see how Annie is fairing. Annie doesn’t really want him there and Andrew, the vicar, doesn’t particularly want to babysit the old woman but an unlikely friendship occurs and both start to look forward to the ensuing visits. Annie begins to confide in the vicar telling him secrets she has kept hidden; some for as long as sixty years.

Annie’s story moves back and forward between present day and her earlier life in the 1940’s as a young wife and mother. A story about what goes on behind closed doors told in a sensitive way and is not too graphic.
Ophelia, Annie’s granddaughter has a small side story of her own which was quite touching even if I couldn’t see the reason for its inclusion.

In telling Andrew her deepest kept secrets Annie has been able to free herself to live her own life.
Annie’s escapades with Ernest’s ashes give for some quite humorous moments in an otherwise solemn story.
Some input from the committees that Ernest was involved with, such as people saying how wonderful, helpful and friendly he was, would have given the reader a better comparison of his two facades.

The writing is straightforward and uncomplicated. I would have liked more emotion portrayed in the story. To grab readers the story needs to be emotionally charged, heartbreaking or heartwarming. We need to hate characters, love characters, desperately needing to know what they will do next.

Garrood has written an empathetic, honest and candid story of life spent in a stringently controlled environment ruled by fear.

Dead Ernest is a moving look at marriage and family life as it was for some in the 1940’s and 1950’s and how it compares to today’s society. 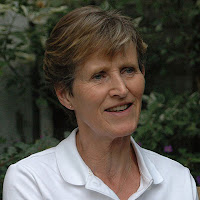 I first started writing as a child; mainly poetry, but there was one horrific novel (mercifully, never finished) in which a woman gives birth to a hideously deformed child in a thunderstorm. While I was bringing up my four children, I began writing and selling short stories to magazines before the enforced immobility following a fractured spine gave me the time to tackle my first novel, Dead Ernest

My main career was in nursing, but I also trained and worked for many years as a relationship counselor with Relate. Widowed in 1992, I re-married and now live with my husband in Wiltshire, where I enjoy riding my horse in the beautiful Pewsey Vale, reading, writing, singing in our large church choir and keeping up with my grandchildren. I also write regularly to a prisoner on Texas Death Row and do local voluntary work with homeless and vulnerable adults.
All my books are very strongly relationship-based. My writing has also been affected by my widowhood and my experiences with my Relate clients, and my books sometimes include issues of death and bereavement. Strangely (and not by design) they all seem to include pet animal funerals (not a subject which normally occupies my mind!).

To read more reviews of Dead Ernest please check out the other blogs on the blog tour. 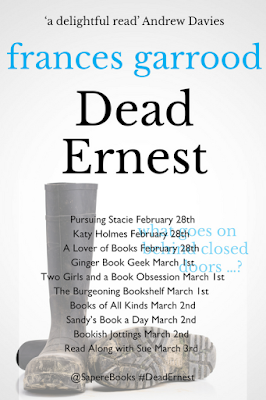 Posted by Veronica @ The Burgeoning Bookshelf at 22:14